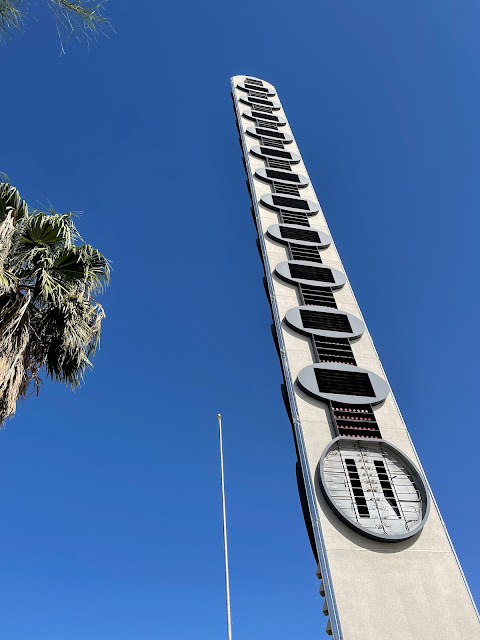 Wow. Three posts in less than a month. I guess I'm on a roll now. It's either that or I actually have something to say. But since it's the beginning of a new month, it's time once again for P.J.'s monthly photo blogging challenge. This month's theme is potpourri, a mixture of things, and boy do I have an interesting mixture of shots that I took last month. In reality, the amount of shots that I actually took was low and the amount of selfies last month was very high, almost 67% of all my shots included my self-serving mug in the frame, so I'm actually pleased that there's only two shots in this month's gallery of photos that has me in the shot.

So anyway, here's my take on this month's theme of potpourri.

This past week I took another road trip, to of all places, Las Vegas. Why you might ask? Well, usually, the only time I ever travel to Las Vegas is when I'm traveling through Las Vegas to get to points elsewhere. It's not a town I really want to spend a lot of time in, but when I have been there, it's always around 110 freaking degrees outside and very unpleasant to walk around, so we get out, maybe for a bathroom break and then hop right back in the car usually on the way to Utah, where it's always cooler.

This time I purposely decided that I wanted to visit Las Vegas and I turned it into a geocaching road trip (but then again, when isn't a road trip of mine geocaching-centric?). Part of the reason was there are several geocaches in Las Vegas with very high favorite point ratings. If you have been following along, you know that I enjoy challenge caches. Find the cache, but before you can log the cache, you have to complete the challenge. One challenge that I've signed requires me to find 15 caches with 1000 favorite points. There are several in Las Vegas and I eventually found three of them, bringing my total of 1000 favorite point caches up to 11. So that gives you the reason why I went to Las Vegas, but the first shot isn't about Las Vegas at all. 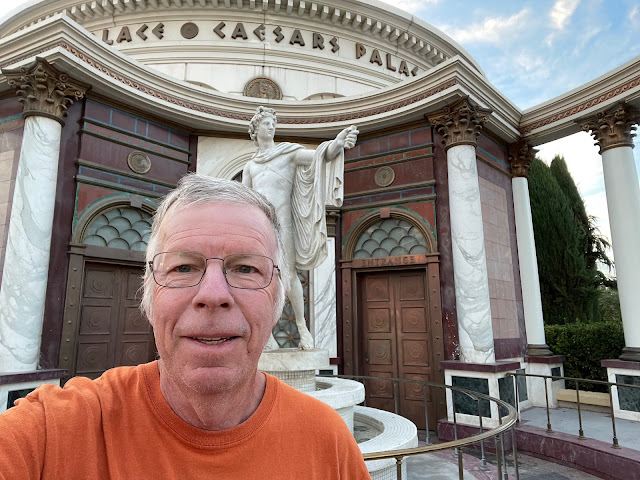 No, this is actually in California. I needed lunch, so I stopped in Baker, California, had lunch, then drove over to the "World's Largest Thermometer." There is a virtual cache located here which I had already logged several years ago when it was over 100 degrees, but there's also a physical cache right near the base of the thermometer and so I ended up finding that one for my second find of the trip. Ironically, I didn't even step back to see how warm it was that day, but I suspect it was somewhere in the mid 70s, a very pleasant day to be out in the desert.

Once getting to Las Vegas, I decided to walk along the Strip. It was late in the afternoon and I wanted to find some of the virtual caches along the Strip. One of the caches is entitled Toga Party and is located outside Caesars Palace. You need to find this particular statue of Caesar and take a selfie of you with it. As opposed to some of the other Caesars nearby, this particular Caesar is quite naked and so I wanted to keep my shot family friendly and thus framed the shot accordingly. Not that anything is family friendly along the Strip, but I have some standards nonetheless. 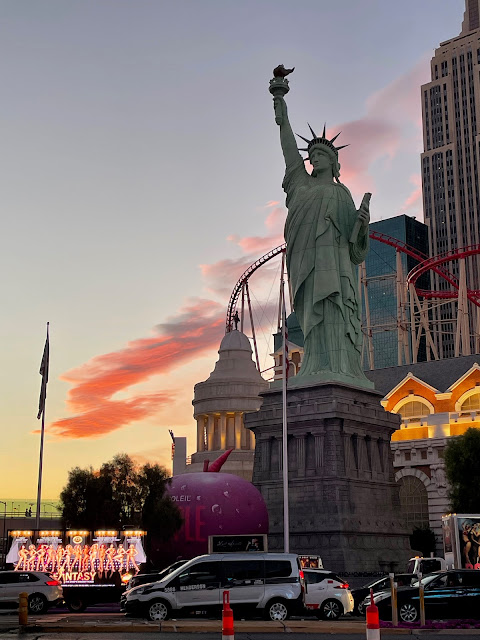 3. Sunset on the Strip

Everything on the Strip is over the top. You like M&Ms? There's a four story building dedicated to nothing but M&Ms. You want to visit Paris? There's a replica of the Eifel Tower along the Strip. Castles, performing fountains and volcanoes, rollercoasters around high rise buildings are all part of Las Vegas and I enjoyed just taking it all in.

As I was heading back to my motel for the first night, I was greeted by this gorgeous sunset behind the New York, New York hotel and casino. I couldn't pass that up. And as noted previously, since this was a geocaching trip, I had certain goals I wanted to accomplish, so riding the rollercoaster, although tempting, wasn't in the plans for this week. Since I didn't accomplish all of my goals, I know I'll be back in the future, perhaps next fall again as I now know that the weather is much more accommodating than in the summer.

No, I didn't go to a play while in town, but I did visit a very dear friend of mine who I worked with for about 20 years before I retired. She subsequently retired a couple years later and she and her husband have since moved to this area. She was our school's media coordinator/librarian. She also owned several "labrary" dogs over the years who would enjoy the library on Fridays during our school year. Our school was very dog friendly and so it wasn't uncommon to see several dogs on campus, especially on Fridays. Annie was the last of the labrary dogs to enjoy the hospitality of the school's library. 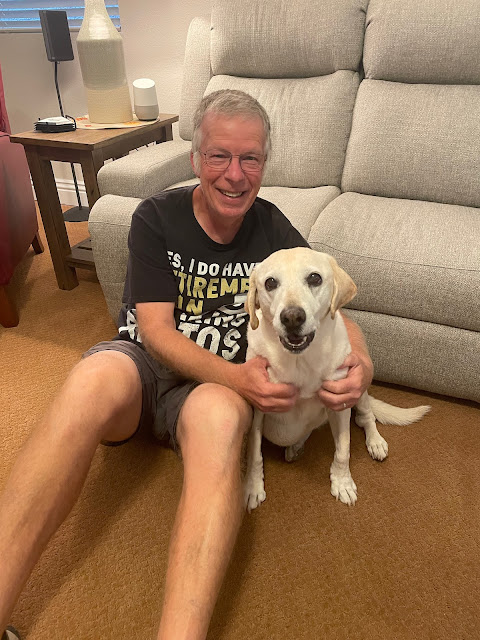 Annie is a very loyal dog and once you were her friend, she would always recognize you and ask for scritches and wag her tail at you. Sometime during the last month of school the year I retired, we had an assembly and I decided that I would be the mascot of the school during the assembly, dressing up in a large cougar costume. At one point, I was resting on a chair on the side of the gym and Annie came over to me and snuggled with me, not something she would normally do when you're so camouflaged, but she recognized my scent.

When I went to visit on my second day there, Annie barked at the door since there was an "intruder" into her humble abode. But as soon as she saw me, she was all tail wags and dog kisses. She remembered and we hadn't see each other in over three years. She's a good girl.

My last night in Las Vegas was again dedicated to walking along a different portion of the Strip. I found this side alley near the Flamingo hotel that had all sorts of restaurants, so I decided that I was going to eat back in there as there just seemed to be all sorts of gastrointestinal delights, including sushi burritos. I didn't try those, but they did look interesting.

Before I had a chance for dinner, I found the Ghirardelli shop and entered. Mistake number 1 according to some people, but I looked at it as an opportunity. I wandered around inside, checked out the menu and then decided that life is short and I ordered this sundae, a Cookie Crumb Hot Fudge Sundae. I posted this shot to my family's group chat and my youngest immediately posted back, "I don't know what that is, but I know I want one."

I decided that I was going to eat dessert first. Well, in reality, I ended up eating dessert that evening as it was a very filling dessert. I know it wasn't very healthy, but it was very tasty and because I don't do this on a daily basis, I could justify it for a one night extravagance. 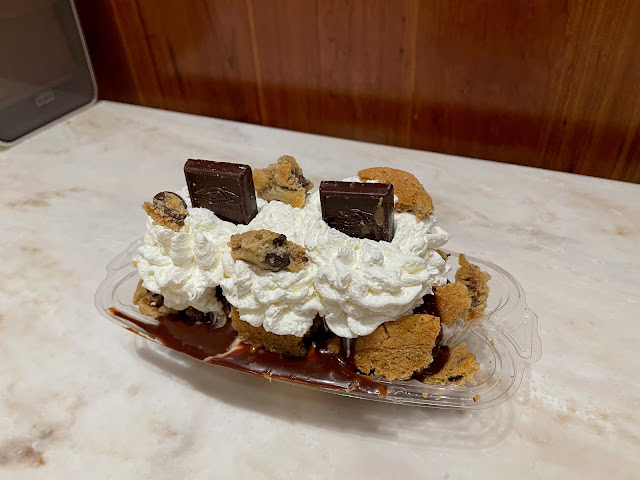 Well, there you have it, my take on the theme potpourri for this month. Please stop by P.J.'s blog and check out some other people's interpretation of the same theme. As always, please comment here. I won't bite.