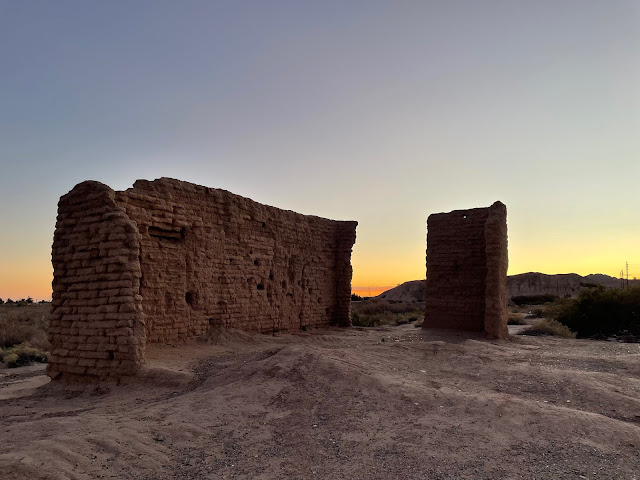 Four months. That's a long time between posts. In fact, it's the longest I've gone without writing anything here since this started back in June of 2019. Could I blame it on the fact that I haven't taken many photos over the last month? I could, but back in December, I took a lot of photos, but they didn't really meet the themes for the month, so I passed on even writing for the photo blogging challenge. Can I blame the new granddaughter? I could, but I won't. I wonder what I took photos of in December? Yeah, that's a no brainer, but I can't blame her so we'll just chalk it up to being lazy again. It's not like I don't have topics rattling around inside my head, but I just have been busy with other things.

So here we are at the beginning of another month and it's time once again for P.J.'s monthly photo blog challenge. This month, as the title suggests is Photographer's Choice, which means I can post just about anything I want that I've taken this past month. Fair warning right now, that this entire post is going to revolve around geocaching, so if you're not interested in that, feel free to move on. 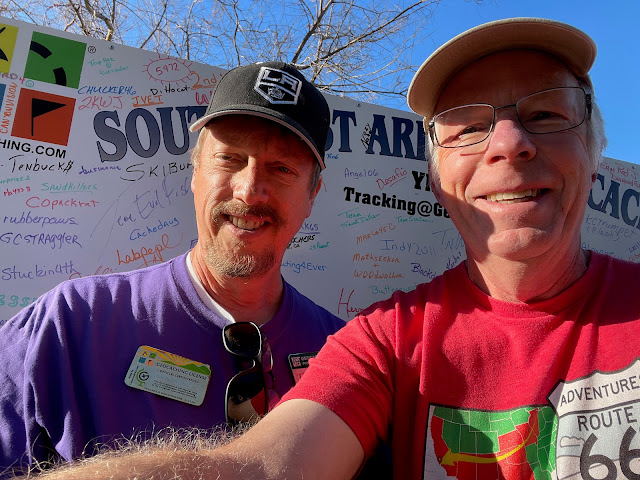 This blog has always been dedicated to my wanderings and last month, I got to wander again, taking a geocaching trek to Yuma, Arizona. After a year hiatus (for obvious reasons), the annual SWAG (Southwestern Arizona Geocachers) mega event in Yuma was back. My friend Mike asked if I wanted to go with him and I said yes, since the last time I went two years ago, I had such a great time, I wanted to experience it again. I had a friend of mine from high school mention that he'd never seen the words "great time" and "Yuma" ever used in the same sentence. If you're a geocacher, you'd understand perfectly as it's kind of a geocaching Mecca for the area. And so we went, geocaching in Imperial County and Yuma County in Arizona for the entire four days we were out there.

Part of the fun of the event is the new Adventures they post. As explained in other posts, an Adventure is similar to a virtual cache, except it also similar to a multi-cache, meaning it has more than one point to visit, but you don't have a container to find. The first photo was part of an Adventure in southeastern Imperial county and was called the Araz Station ruins. It was reportedly a stop on the Butterfield Stage route, but there's some debate over that. Nevertheless, we were there at sunset on the first day of the trip and the light made for some great shots. 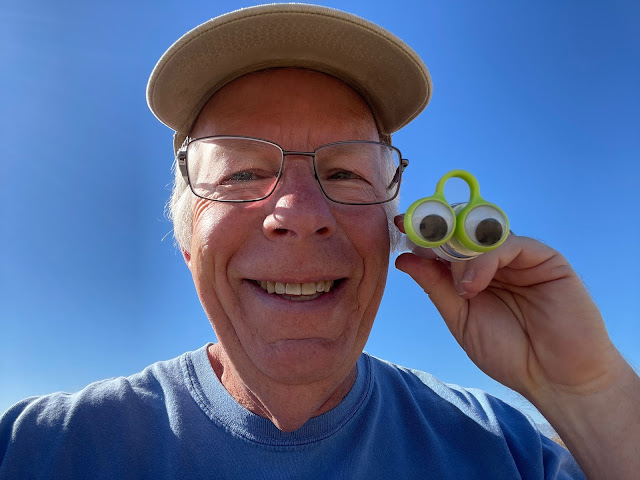 Over the course of the weekend, we had some great food, found a lot of great caches and did some fantastic Adventures. We also experienced the Discover Yuma event, which is like a large geocaching scavenger hunt for information about Yuma and the surrounding area. Once complete, you bring your scoresheet back and you get a free geocoin, which is a tangible souvenir of the day's events. Mike had never done the Discover Yuma series before, so this was new to him and I did it last time I was there. It made for an enjoyable day on Saturday.

The second shot is of Mike and I in front of the log for the Mega Event which happened on Sunday morning. We did some hiking that morning picking up some more Adventure locations and found some other geocaches, then decided to do more caching in and around town as there's lots to do if you're a geocacher.

On Monday, we headed for home, but did a lot of caching on the way home. I even hosted an event in El Centro at the In-n-Out there as a way to attend an event in that county. There are challenges out there that want you to attend events in 10 contiguous counties. With that event, I now have attended events in 11 contiguous counties. Now I just need to go out and find that challenge so I can claim it. And with all of the caches we found in Imperial County that weekend, I bumped my overall count of finds there to 131, allowing me to claim the 10/100 California County Challenge. Yeah, find at least 100 caches in 10 different California counties. So I had that going for me as well by the end of the trip. Needless to say, it was a great weekend of geocaching. 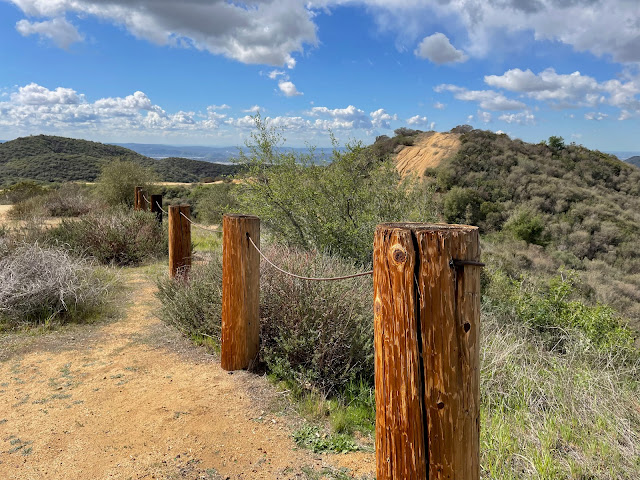 The month wasn't over yet and geocaching was still a priority for me as I went on several other geocaching excursions over the next couple of weekends. One trip took me up to the high desert north of Victorville where we did a geo-art (caches laid out in the shape of something, like a smiley face). This particular series was called the Orion Series, because it was set up out in the desert to look like the constellation Orion. The best word I could use to describe many of the cache hides is whimsical. It's not often when you're looking for a cache and the cache ends up looking back at you.

But, part of the fun of geocaching besides finding them, is hiding them. So later in the month, I went on a hiding spree, hiding 6 new caches for people to find. The caches have all been found once and I believe there's a hiking group going out tomorrow to find these caches, which I hid in the wilderness park north of my house.

The fourth photo was taken near one of the cache hides. I called the hide 6 Posts for obvious reasons and it's by far, one of my favorite shots I've taken in the last couple of months. You'd think that a photo of 6 posts in the ground wouldn't do much, but I got very lucky with lighting and with the cloud cover that day to get, what I think anyway, is an extraordinary photo. If you look closely, the horizon is actually the Pacific Ocean, probably 40 miles away. It was a gorgeous day, considering I live in the Los Angeles Basin and we're not always so lucky to get such distant views. 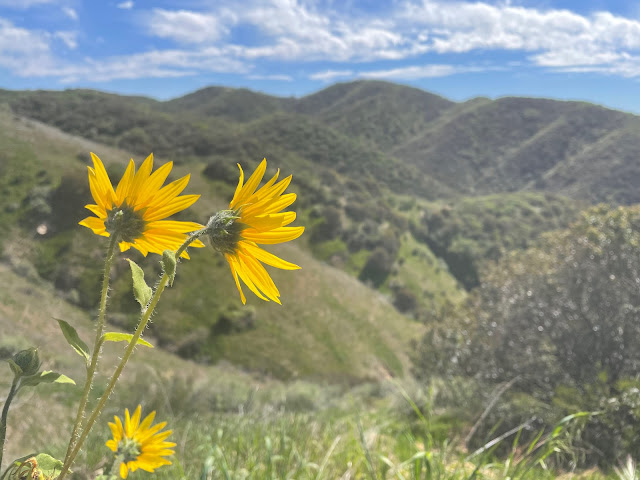 Lastly, I've been upping my hiking this month as well. Midway through the month, I got my permit for a backpacking trip up into the Sierra Nevada at Cottonwood Lakes for August. I went last year, but we cut it short due to various circumstances, so I've started hiking more miles each and every day thus far to get my stamina up and to get my legs in shape. When the weather warms up, I'll start hiking at higher elevation as well.

I took this shot a couple of days ago while out on a hike in the Marshall Canyon area, which is located just to the west of the Claremont Wilderness Park. In fact, the trails link up at the back side and you share some of the same trails if you hike the Marshall Canyon trail. The wild sunflowers are just starting to grow and bloom again and I thought the background of the canyon and the cloud filled sky to the east was perfect. As it is, this view today would look vastly different as there is now a huge plume of smoke from a wildfire that started burning today in about the same direction as this photo was taken. Fortunately, we supposed to get some rain over the next couple of days, so maybe it will be tamped out fairly quickly.