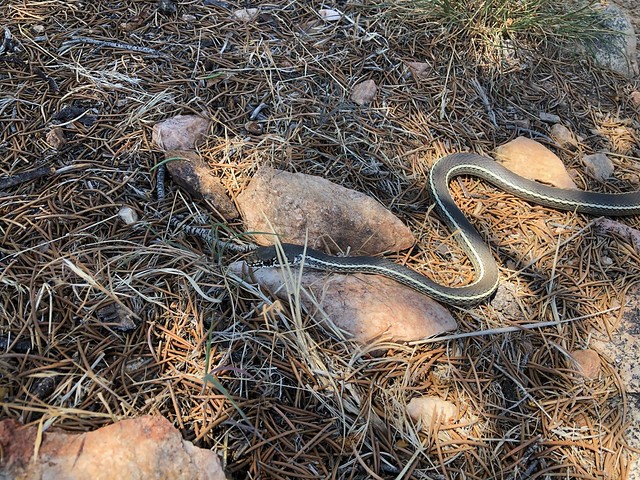 The theme for P.J.'s photo blog for this month is Adventures, and it couldn't have come at a better time, since I went on quite an adventure this past month, though not exactly as planned. But then again, that's kind of the point of an adventure in that you never know how it's really going turn out until after it's done. So here's my five photos from last month, four of which are part of my backpacking adventure and one is of something different.

For those of you who have been following along, I've gotten the reputation as the snake whisperer. For whatever reason, I seem to attract snakes to me. I prefer to think that it's because I'm more observant when out walking in the wild, but that's another story that would take too long to tell here. Either way, people say it could be quite the adventure hiking with me.

My friend Greg and I were on several training hikes up in the Lake Arrowhead and Big Bear Lake area of our local mountains. In Lake Arrowhead, we spotted a Southern Pacific rattlesnake attempting to cross the road. Fortunately, after our car straddled it on the highway, it had the sense to go back to the side of the road and I was able to get a nice video of it as it slithered into the bushes. 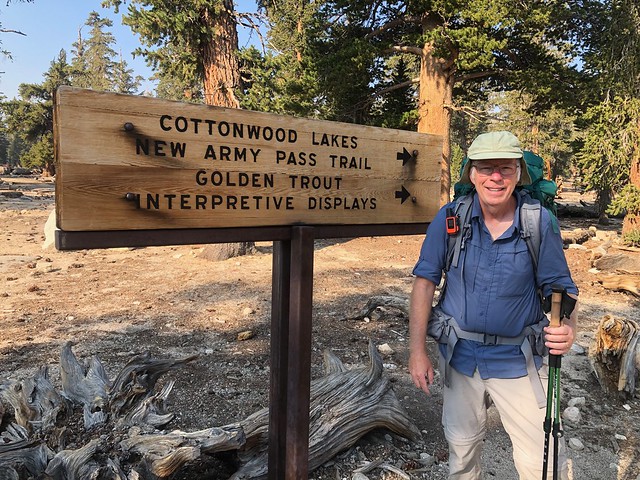 This garter snake, a type I've never encountered before, was stretched across the Pacific Crest Trail (PCT) when I spotted it. I was pretty content just to lay across the trail while I took some video and photos of it. I estimate it to be about 4 feet long or so, on the large side for garter snakes, but I guess it was enjoying a bountiful time eating some of the rodents out in the wild. We walked around it, I decided to take another photo from the other side, but never got the photo because I accidentally kicked a rock in the direction of the snake and it took off.

We'd hoped that the training hikes at altitude would have prepared us better for the trek ahead, but we miscalculated a little bit. This is the beginning of our hike which was supposed to be a 23 mile loop through the Cottonwood Lakes region, over New Army Pass and into Sequoia National Park. Following that, we were then going to head south on the PCT and then catch the Cottonwood Pass trail back down to our base camp near Horseshoe Meadows. We spent the first night at Horseshoe Meadows, which is slightly over 10,000 feet in elevation and then began the hike the next day. 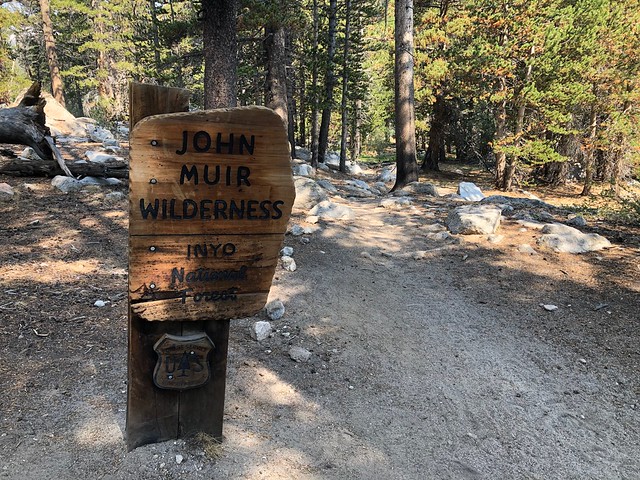 As you can see, it looks like I'm pretty excited to head out on the trail and I'm not going to lie, I was. The adrenaline had kicked in and my pace was way too fast for the first 100 yards or so. Fortunately, my shortness of breath told me I needed to slow down, which I did and we progressed at a much more reasonable pace for the rest of the trip.

However, what you're not seeing in the first photograph is my migraine headache. Most of my migraines are caused by stress and usually when the stress is released, is when I suffer the headaches. I can't begin to tell you how many times I've had a migraine on the first day of Christmas break, the first day of Spring break and the first day of Summer vacation when I was teaching. This hike was no exception. I was stressed. As I noted in my last blog entry, this was the first time I'd been backpacking since I was 19, the week that Elvis Presley died. You can do the math, but needless to say, it had been a long time since I'd been backpacking and I was overpacked. I had way too much food and the other big thing that was weighing me down was my tent. Couple that extra weight I'm carrying with a migraine that my prescription meds are just barely blunting and it wasn't the most pleasant trip I've ever been on. 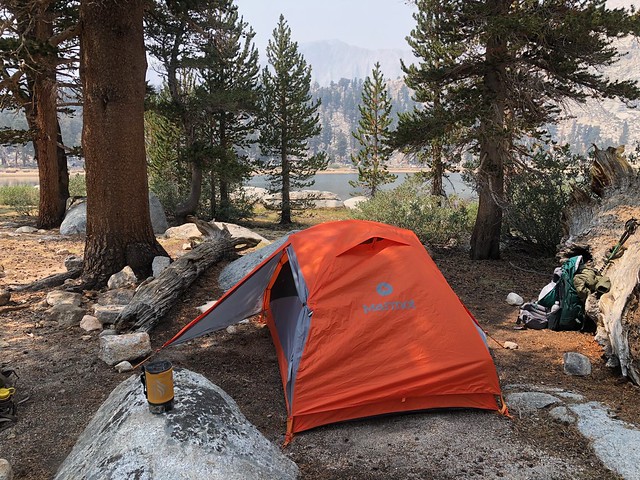 Still, we pressed on and slowly the first couple of miles were behind us. We'd entered early on, the Golden Trout Wilderness area and then progressed up the hill until we entered the John Muir Wilderness area. The next day, we were supposed to enter into Sequoia National Park, but we needed to finish out this day first.

With the headache, at least checked for now, the hiking was a bit easier, but I had no appetite. So that meant the weight of my pack wasn't declining either. I forced down some food knowing that I needed calories in my system, but it took me the better part of an hour to eat an entire Clif Bar. If you've ever backpacked, these are snack bars designed for hiking, very dense, loaded with calories to give you energy.

I think there was another contributing factor as well, in that we were getting smoke being blown into the area from the French Fire, which was about a hundred miles away or so. The views were rather hazy and you could smell smoke in the are. If you look at photo number 4, you can see the view from our campsite was rather hazy. I'm sure this didn't help since we were also hiking above 10,000 feet.

After setting up camp and finding a geocache at the far end of Muir Lake, we hung out at camp and discussed the next day's hike. This would have taken us up over 12,000 feet in elevation and been the longest mileage day of the hike. Neither of us were feeling really well and we made the decision that we were going to end our adventure early and head back down to Horseshoe Meadows and go home. 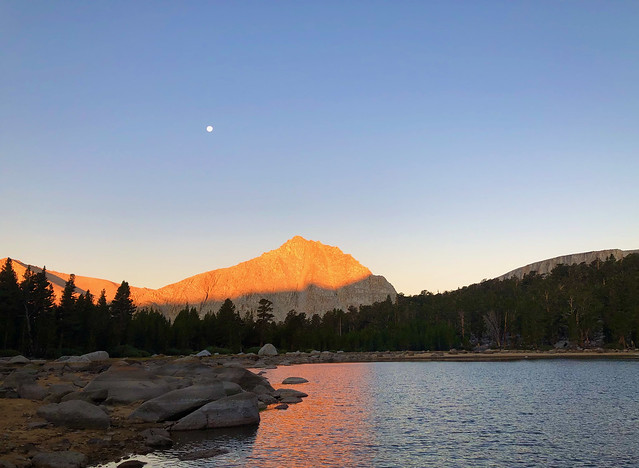 Some of you might say that the trip was a disappointment. Not really. I learned some valuable lessons from the trip. While my tent is an awesome tent for car camping when I'm by myself, it's too heavy for a backpacking trip, so I need to look for something that's much lighter to carry on my next trip. And there's the second thing I learned and that even though this trip was very hard, it wasn't something that would turn me off on backpacking forever. I'm looking forward to more adventures like this, perhaps even coming back here next year.

When we got back to the car at the end of our up and back overnighter, I told my friend, "Let's remember the good things about this trip." And so I leave you with one last photo that I took that morning. The winds had shifted overnight and blew all of the smoke from the fire down the hill into Owens Valley and we were left with crystal clear views. The sun was rising, just starting to hit the tops of the peaks. The waning gibbous moon was starting to set over the same peak and the scene was magical. This is why I go on adventures like this.

As John Muir stated, "The mountains are calling, and I must go."

Please be sure and check out some other people's interpretation of the same theme on P.J.'s blog.