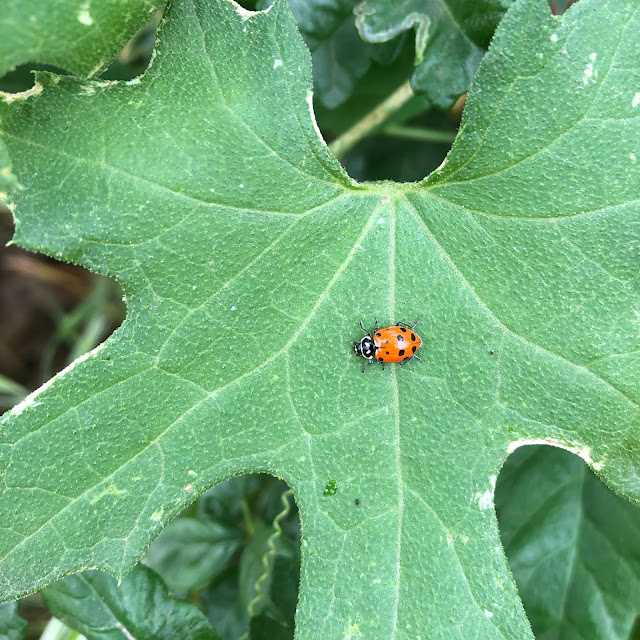 It's the first week of the month and that means that it's time for P.J.'s monthly photo blog, this time with the theme Spring has Sprung. With all of the hiking I've been doing recently, it wasn't much of a stretch to come up with 5 photos that fit the theme for this month, so here we go.

1. Ladybug on a leaf

Last year at this time, I was taking photos of insects left and right. Butterflies and ladybugs were the main subjects last year. This year, I've been concentrating on the reptilian end of the animal kingdom (more on that later), but that hasn't stopped me from occasionally sneaking a shot of some insect that I end up crossing paths with. Insects are out and about finding mates, laying eggs and generally doing those life things that perpetuate their species, so this is a general photo indicating that spring definitely has sprung. I really liked the contrast of this one with all of the green and that single splash of red color in the middle.

This particular trail leads up to Johnson's Pasture from Pomelo Ave. in Claremont. It's kind of tricky to find the actual access to this particular trail on the low side because there's a lot of no trespassing signs all around, but if people pay close attention, they'll notice that the no trespassing signs pertain to the horse ranch to the west. Even so, the trail itself it still kind of hidden and you kind of have to have inside knowledge about it. 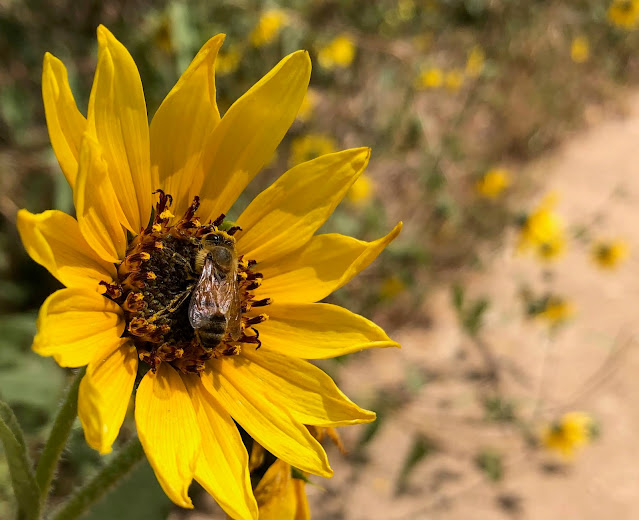 In reality, I don't mind since that usually means there's less people on this particular trail, thus more wildlife to see, etc. I've encountered all kinds of birds, snakes and insects up there and there's a nice "grove" of wild sunflowers up there lining the trail. I can usually guarantee there are several honeybees pollinating the flowers and can usually get one or two decent shots of them creating more sunflowers for next year. This year's crop are starting to die out, but as you can see by the blur in the background of this shot, there's plenty of them up there for all to enjoy as long as everyone who goes through there practices the "Leave no Trace" hiking philosophy. Leave only footprints, take only pictures. I think we really need to keep that in mind as the population of bees dwindles over time due to insecticides doing what they do best to insect populations. It's not just sunflowers that we'll need in the future, but a lot of other plants depend upon bees.

I know, I know. I write about geocaching a lot. But it's something I enjoy and when an old teaching friend of mine said he was having problems with a particular cache, I jumped at the opportunity to go out and cache with him. I'd already found this cache, but it's always fun seeing people's eyes light up when they find a really well hidden cache, as this one was. 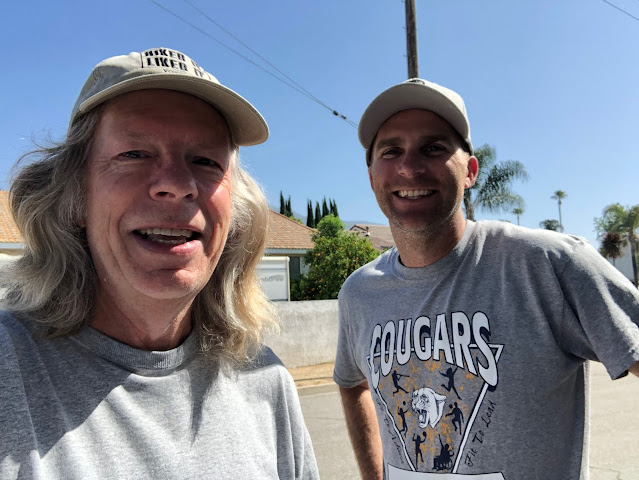 He, as most people do when they see me nowadays, commented on the length of my hair. In the past, my hair would get slightly longer in the springtime and usually after school got out, I'd go and get my summer cut. It was not really much of a difference back then, but you can tell it's still spring because I haven't gotten my hair cut yet. The key word there is yet. It's really starting to drive me crazy, but there are still a couple of people who haven't seen it in person yet, so I'm holding off until I see them and then I'm getting it cut. I'm fully vaccinated now and it's really time for the locks to go. Then we will know that summer has sprung, but in the meantime, my hair is still shaggy.

But Paul, that isn't a snake. Yeah, I know, but I don't have any still photos of snakes this month, just several videos, but lizards and snakes are in the same family and with the warmer weather, they are starting to be out in abundance, which means we all have to be careful while hiking or geocaching.

I've posted so many videos of snakes on Instagram and Facebook this season that several people have even considered not following me anymore, while other people have started calling me the Snake Whisperer and still others have suggested that I'm becoming one with the snakes. I'm not sure about any of those, but I might grab the handle of snake or reptile whisperer for a couple of reasons. 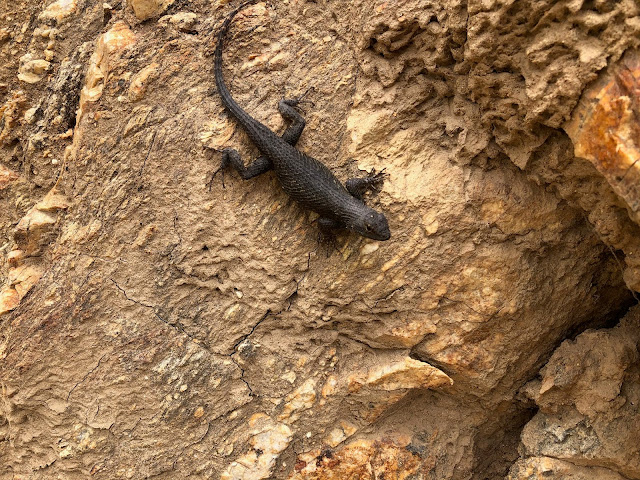 Once after a hike, I walked into the parking lot and there was a large lizard, similar to this one, sunning itself on a rock. I ended up sitting down on the rock right next to it, no more than 5 feet away or so. It didn't even flinch, like it knew that I was not going to harm it and I only wanted to get a close up shot for posterity. So it posed for me and then just sat there after the photo shoot was done.

The second instance happened earlier this week when I was taking the last shot in this series. I happened to look down the trail and there was another hiker just standing in the trail with camera out and I could see down on the ground in front of her, a two foot snake, although I wasn't sure what kind it was because I was too far away. So I hurried up to where she was, but the snake had already slithered away into the bushes. The other hiker confirmed that it was a Western Diamondback rattlesnake, which I assumed it was as I walked toward it because it had its tail up and I could see the rattles.

Anyway, I peered into the bushes on the side of the trail just in case I might be able to get a glimpse of the snake, but I couldn't see anything, so I turned to walk down the trail and continue my hike. Only after I walked away from the snake, did it rattle its rattle at me, as if to say, "Here I am." So I walked back over to where I'd heard the sound and spotted the snake curled up in the grasses by the side of the trail. It never rattled its tail again at me, even though I was closer to it when I finally saw it, as opposed to when I was walking away. Apparently, it knew that I meant it no harm and only wanted to see it. So yeah, I guess I'm the snake whisperer. 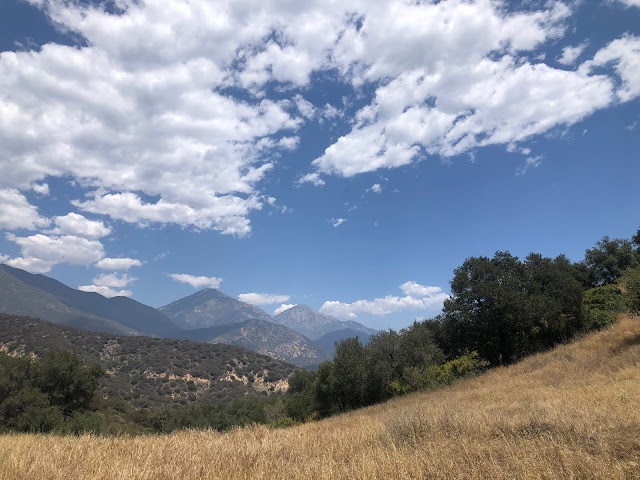 Even though our last governor declared our drought over, we really haven't been out of a drought in California in possibly 20 years. We'll get one or two good rainy years, but then the next six or seven years are below normal. This year is no exception to that with the snow pack in the Sierra Nevada at 25% of normal. That's not a good thing as it means a dry summer and fall and more wildfires throughout that same time period. We've already had a couple of local wildfires in Southern California already in the spring, usually a time of greenness, but this season, we're already into our California Gold season where the grasses start to die off and we get this beautiful contrast between the dark green of the oaks and the brown of the hillside. All this really means is that spring, even though it's sprung, is quite short this year and we're quickly approaching summer time.

And there you have it, my interpretation of the theme for this month, Spring has Sprung. Comments, as always are greatly appreciated. Please stop by P.J.'s page and see how others interpreted the same theme.